First generation Barney Abma was born on April 25, 1901. He came to America for the first time in 1917; he was only 17 years old, searching for a new beginning. After spending a few years out west, then a short stay in Pennsylvania, and back to Holland to marry, Barney and his new wife Anna (nee Vanderzee, born Feb. 18, 1904) settled in Wyckoff at the present location of Abma’s Farm in late 1920s.

They began working for the Yeoman farm and rented out part of the original farmhouse. The Yeoman farm was originally owned by Daniel Yeoman, then passed on to Mr. and Mrs. George Fox (nee Yeoman) in 1880. In 1932, Barney purchased the 50-acre farm from George Fox for $6,000.

A section of the land was sold off and thus Abma’s 32-acre farm was born.

Originally, Abma’s Farm was a mom and pop style farm, growing and producing enough to sustain the family. Barney and Anna had cows and pigs as well as an orchard. Barney also dabbled in vegetable growing.

In the 1930s, Anna gave birth to five boys: Fred (the oldest), Sam, William (Willy), Henry (Henny), and James (the youngest, born in 1938). The five brothers grew up on the farm, helping their parents with the farm work. As the Abma boys got older, Fred and Sam split away from the family business to start their own respective landscaping businesses. Henny, Willy, and James stayed on the farm. They milked the cows and did various other farm chores to keep everything in order. Soon they focused on taking care of egg laying hens, selling the eggs as a source of income. 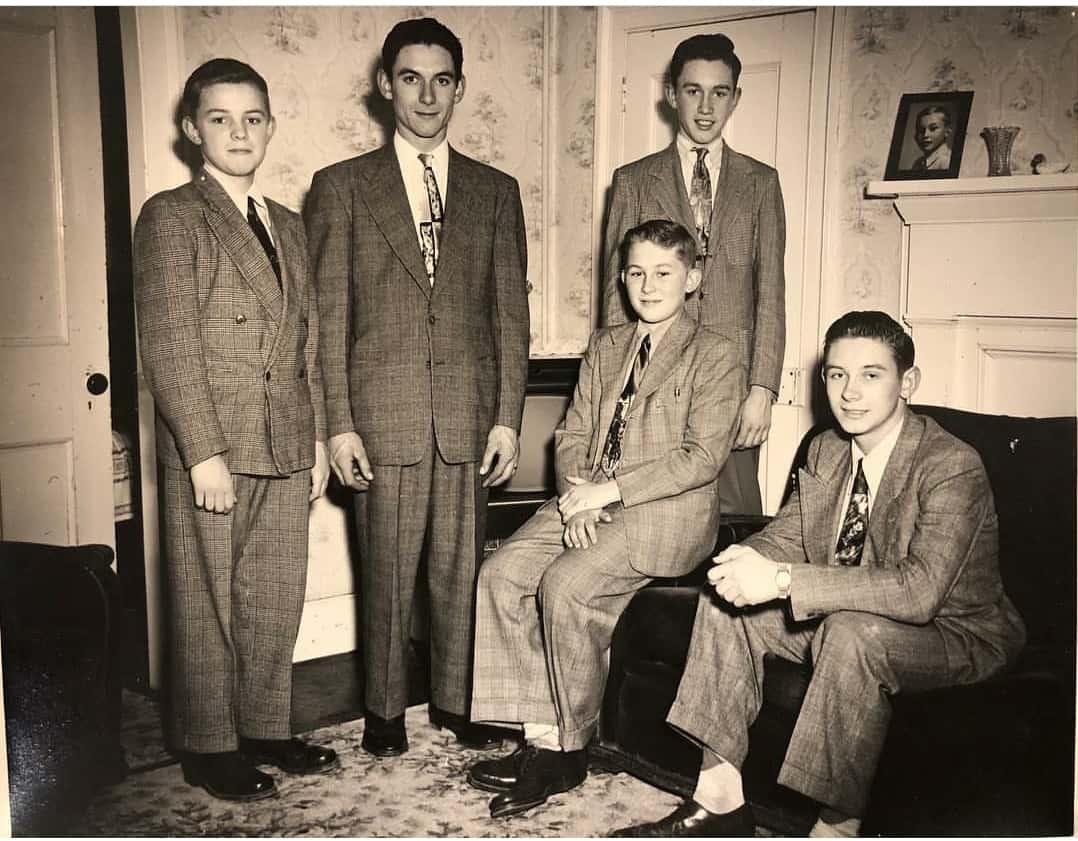 In 1961, James married Judy Spoelstra. They received three cows as a wedding present from Barney and Anna – now that’s a unique gift!

James and Judy started their own family; first came Beth, then James Alan (Jim), then Jodie, and finally Kim. The kids began working on the farm at an early age, continuing the Abma tradition.

They fed the chickens, collected eggs, and did odds and ends around the farm. James and Judy began selling eggs and raw milk out of their house “self-serve”. As the kids got older and the retail egg selling got busier, they transitioned the ’carriage house’ of the old barn (now the Tomasello Winery Tasting Room) into a one-room saleroom with a cooler for the eggs and milk. Self-serve turned into one employee, which then turned into several employees running the operation.

The egg business reached its peak in the 1960s. James and Henny grew the flock from just around 1,000 hens all the way to 25,000! They utilized the Dutch-style barn (now the farm market) as a three-story chicken coop in addition to many other coops around the property. James drove early morning routes all over northern NJ, delivering eggs wholesale. 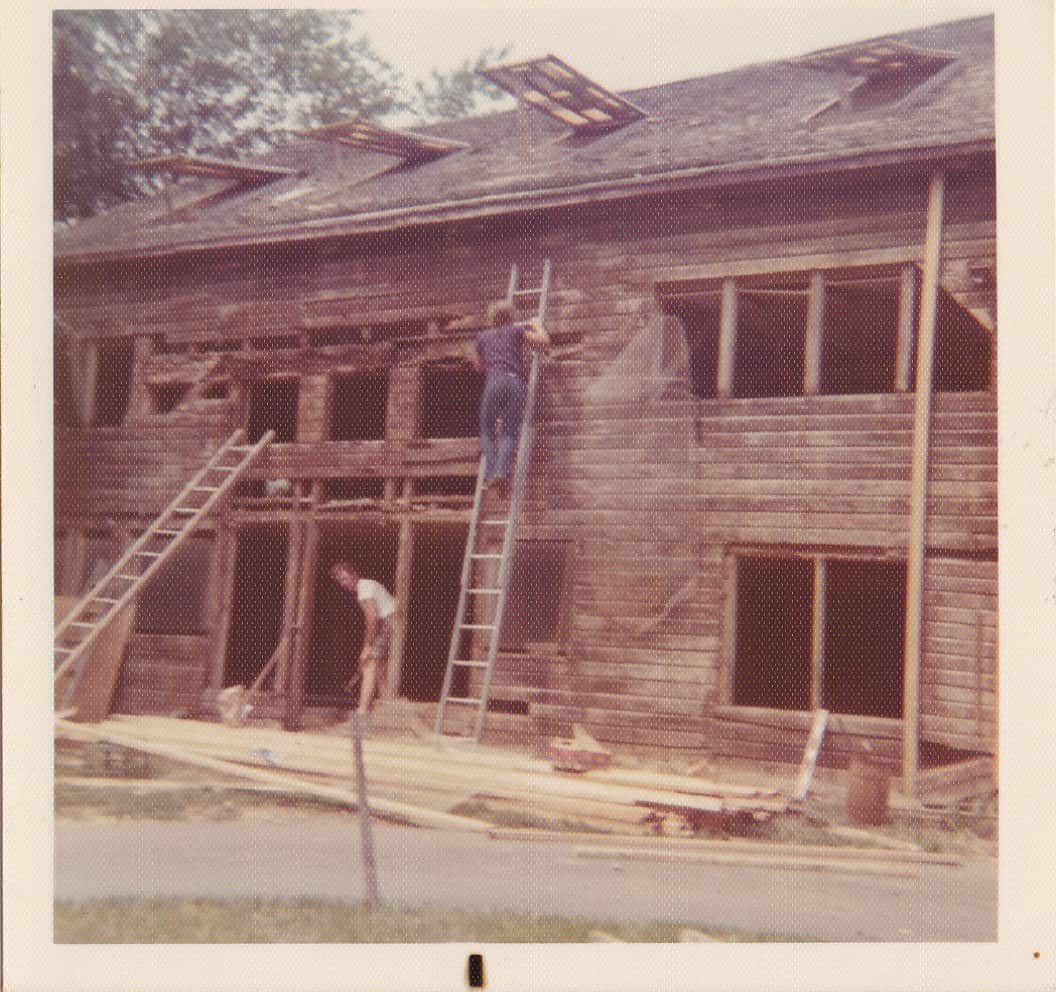 Transitioning the barn from a coop to the market, circa 1970

Collecting thousands of eggs each day was quite labor intensive, so James set out to find a better solution. With the help of Judy’s father, a tin smith, James built the ‘roll away nest’ system that we still use today. Chickens roam around the coop, cage free; when it’s time to lay an egg, they fly up to the nest. The bottom of the nest is angled so the egg rolls down and lands on a conveyor belt. The conveyor belt moves the eggs down the line to the collecting room where they are organized on trays and either cleaned for cartons or brought straight up to the market as basket eggs.

Soon it was time for Barney to retire, but if one thing is for sure, Abma men do not “retire”! He started a new hobby project: growing flowers. This hobby would pass down the family line, eventually evolving into the eleven greenhouses we have today, including four retail greenhouses.

As time went on, egg prices throughout the country went down and the cost of chicken feed rose. It was no longer conducive to operate an egg farm, so the brothers began to branch out. The three families worked together as James grew vegetable crops, his brother Willy expanded on the greenhouses, and Henny continued egg deliveries and routes. 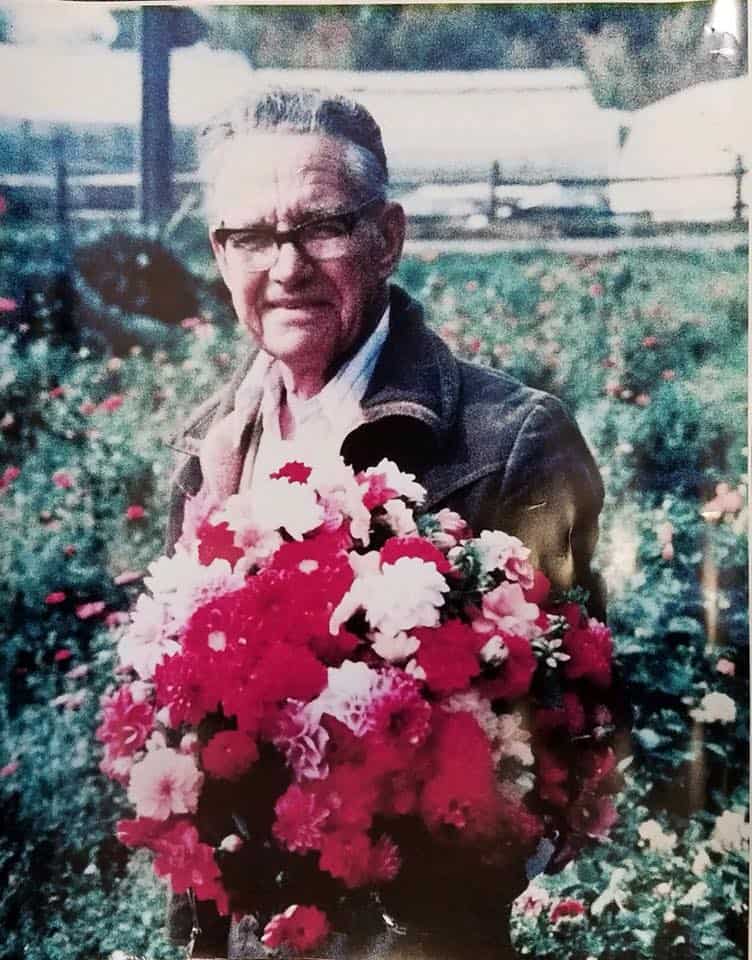 In 1981, Jim went to Delaware Valley University and received his bachelor’s degree in horticulture. He began managing the vegetable production while his father James managed the market. At the same time, James’s brother Henry moved to Pennsylvania to start his own dairy farm.

Jim married Pam Westra in 1985. In 1987, they welcomed their first child, James (Jimmy) followed by Joshua in 1989 and Joy in 1991. Just as the generations before them, the kids grew up on the farm, learning farm chores at an early age. The difference now was that Bergen County - an area once dotted with farmlands, cows, and barns - transitioned into the bustling suburbs of the late twenty-first century. Although the world changed around the farm, Abma family values remained a permanent fixture within the property lines.
Around this time Jim also started up the Composting Site, an important area on the farm where humus (compost) is aged and screened with sandy fill into healthy, nutritious topsoil for the fields. This expanded over the years to serve contractors, landscapers, and homeowners in the community.

The farm and market had expanded far beyond eggs and milk in a cooler. A wide selection of homegrown vegetables added to retail sales along with a country craft section managed by Beth. Pam ran the Compost Office for Jim, and Judy continued to run the expanding office operations. Jodie, fresh out of college with an accounting degree, married and shortly moved to Massachusetts. In 1988 Pam started the deli and kitchen operations, making country style deli salads and perfecting our now famous chicken salad. In 1989, Pam and Jim started the annual hayrides and pumpkin Picking – events that are now treasured traditions for families. In 1990, Kim, the youngest sibling, started Abma’s Dutch bakery, focusing on fruit pies like Apple Crumb, breads and muffins, and more. She continued expanding the bakery for more than 10 years; in the early 2000s Kim moved to Sussex County with her own family and opened Clove Brook Market. In the late 1990s, Beth branched off from the family farm and opened her own craft store.

In 2005, Willy retired, and Jim took over the greenhouse operations. Here he found his passion: growing gorgeous annuals from plugs and creating custom container gardens.
Judy retired in 2008. Pam took over the office and accounting responsibilities and began building up the education programs at the farm. She introduced birthday parties, farm tours, and various programs with the help of her staff.

As the fourth generation of Abmas grew up on the farm, they each found their own passions. Jimmy, infatuated with gardening at an early age, worked in the fields alongside both his father Jim and Craig, Jim’s right hand man and cousin-in-law. In 2005 Jimmy took over all vegetable production as the Fields Manager. In 2010, Jimmy married Anna. Anna worked first in the bakery, then moved over to the office to aid Pam. She is now the Barnyard Petting Zoo Manager as well as the Creative Director. Together Jimmy and Anna founded the Abma’s Farm CSA program. The CSA program started out with 20 members and has grown to over 400. Jimmy and Anna have three children: Colton, Charlie Mae, and Trace.

After Josh graduated from college for horticultural management, he switched gears when the Compost Department needed help. In 2014 Josh became the Compost Site Manager, overseeing all humus, topsoil, and mulch operations. He also manages and maintains equipment and heavy machinery on the farm. In 2016 he married Valerie, and she began working full time for the family farm. Valerie is now the Compost Office Manager and the Advertising/Marketing Manager.

Joy found her niche outside the farm and in the medical field – she is a registered NP. She married Dan in 2015; Dan began working at the farm in 2018 and is now the Retail Sales Manager at the greenhouse. Joy and Dan have a daughter, Paisley and a son, Carter.

Abma’s Farm continues to expand and evolve. In 2018, the petting zoo was badly damaged by Winter Storm Quinn. Later that year, the entire zoo was reimagined, renovated, and refenced into a new learning experience with more animals and features, nick named “The Barnyard”. Over the past few years, Jimmy expanded the vegetable production to include wholesale; Abma’s Farm works with twenty-four Shoprite stores and several local distributors. In 2019, the farm began renting 240 fertile acres in Hillsborough, NJ for vegetable production.

Family traditions of deep faith in the Lord, hard work, honesty, and selfless service continue to pass on through the generations. The farm and family constantly strive to serve the community through all aspects of the farm.

History of the Barns and Outbuildings

The Original Homestead and Summer Kitchen:

The original homestead was a one-room dwelling with a loft upstairs. In 1840, the rest of the house was completed. Today, the classic white farmhouse sits proudly overlooking the farm.

Late Eighteenth Century Dutch Barn:
The post and beam barn (now the farm market) is considered one of the best preserved Dutch barns in the country.

Most of Bergen County’s early houses belonged to farm complexes. The early mixed farming practice in the area required many buildings – barns, cow barns, stables, granaries, woodsheds, smokehouses, out kitchens- and other structures in addition to the farm houses.

These groupings of buildings were as characteristic of the Dutch-American farm as were the people and the land. Of these buildings, the New World Dutch Barn is important to the study regional vernacular architecture. A New World Dutch barn is an almost square-in-plan structure, somewhat wider than it is long, with a broad gable roof, low side walls, and major entrances in the gable ends. A wide central aisle is flanked by several narrow side aisles. The interior central space is defined by a series of anchor bents, and anchor beams stretch across the aisle to support a hay loft. The Dutch-American farmer used this spacious central aisle as a threshing floor, while large doors in the gable ends allowed wagons to pass through the barn to deposit their loads in the cavernous loft. The side aisles were used as animal stalls. 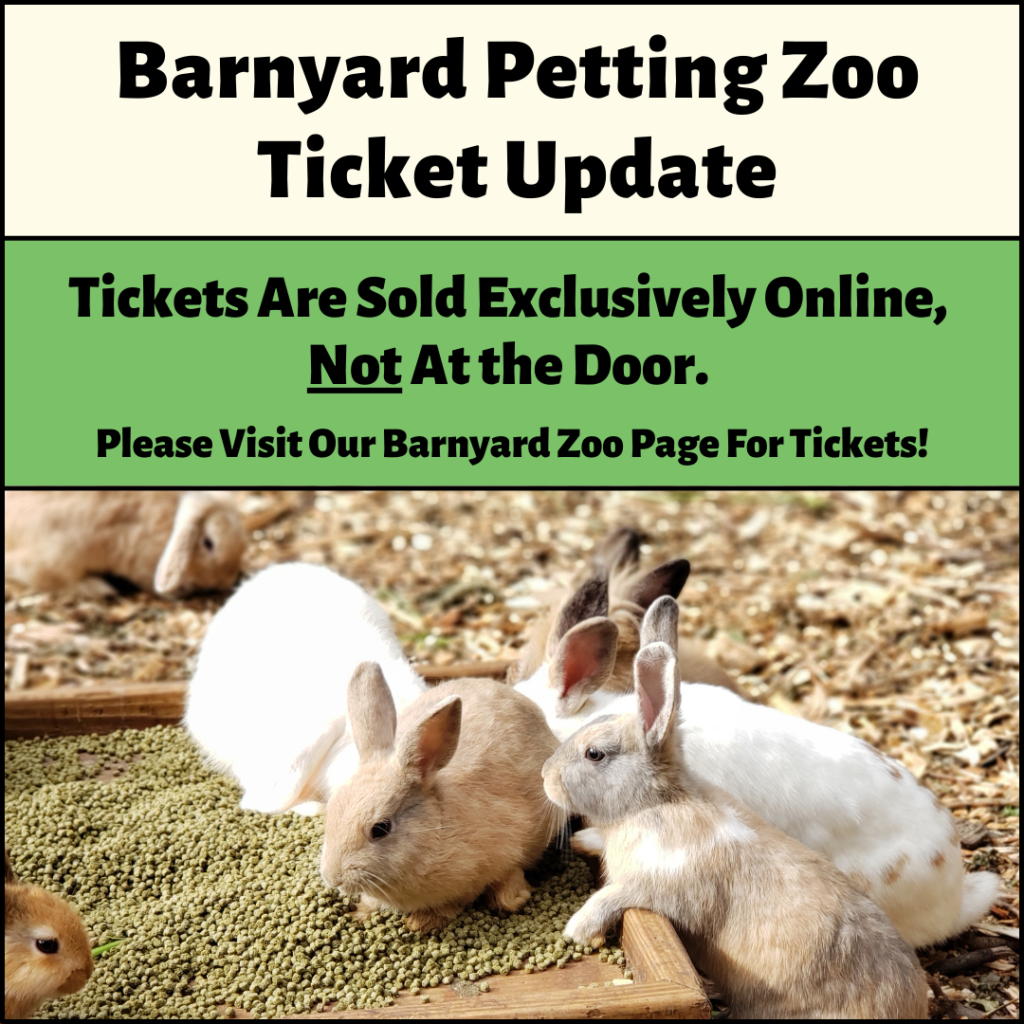